Cortona Students Build Robot to Help Save the Coral Reef

Students from Cortona Academy in Herndon built an underwater robot to help save the coral reefs by removing an invasive species of starfish. The students from Cortona’s Science, Technology, Engineering and Math (STEM) class displayed the underwater robot recently at the 2016 USA Science and Engineering Festival in Washington, D.C. Cortona was one of the few school programs exhibiting their innovations alongside major STEM contributors like the National Aeronautics and Space Administration, the National Science Foundation and other science and technology organizations. 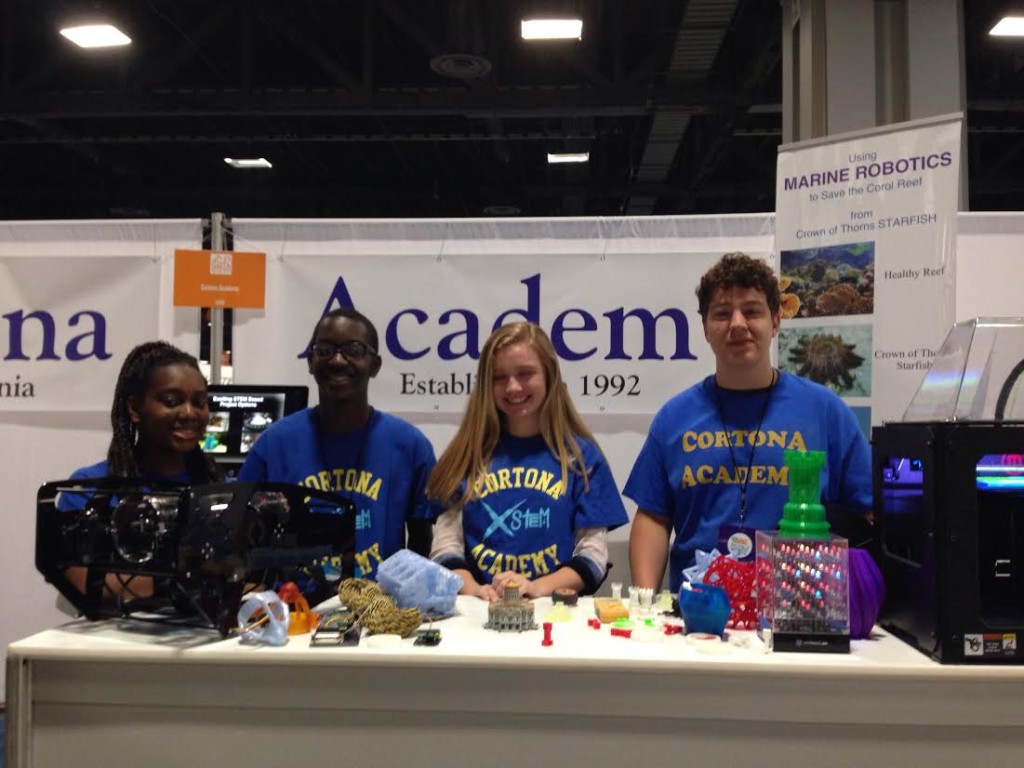 “We created a robot meant to save coral reefs by attacking the invasive species harming it,” said 18-year-old Araba Dadzie of Alexandria, VA. She explained that the drone is designed to find the invasive Crown of Thorns starfish and inject it with a natural vinegar solution.

“The main thing that shocks people is that this particular starfish in a weekend can destroy a coral reef that has taken 20 to 30 years to grow,” said Cortona Director Sharon Strauchs. “This robot that the students designed is something that has a practical and important humanitarian application.”

Cortona Academy was one of a handful of schools that participated as exhibitors in the festival, which had more than 3,000 hands-on activities from universities, corporations and science foundations. “The level of expertise that the students of Cortona Academy exhibited with their presentations at the event, such as their marine biology display, impressed the students and scientists who attended,” said Strauchs. “We are proud of our students who were able to display such a high-level robotics project, which was the only one created for humanitarian reasons. Our invention is much like what is being done at universities and research centers.”

At the Science and Technology Festival, Cortona Academy displayed an extensive array of technological devices for students, families and other attendees to investigate. In addition to the underwater robotics project, students demonstrated some of the technology used by the STEM class, including premium quality 3-D printers which could be used to print the components of an underwater robot. This would enable schools and families who have a 3-D printer to join the worldwide movement to save the coral reef by printing the robot components at a much lower cost than purchasing them.

STEM team member Araba Dadzie said the small, individualized nature of Cortona Academy has opened doors for her that were not available at her last school. “In public school it’s based off your grades whether you can join a STEM team, but here the Cortona mentors like to incorporate everybody no matter what your grades are,” she said.

Cortona Academy, located at 13505 Dulles Technology Drive in Herndon, has cutting-edge, compassionate educators providing a superior education in a structured learning environment. Each student’s curriculum is based on the student’s needs, interests, abilities, schedule and plans for the future by providing individualized instruction with an emphasis on projects, internships and mentors.  By providing cutting-edge individualized education since 1992, Cortona has been changing the face of American education. For more information on Cortona Academy, visit www.cortonalearning.com, or call 703-464-0034.