Cortona Academy’s new year started out with one of the most imcredible experiences that ANY of our students or parents could ever imagine, witnessing, LIVE, an open-heart surgery! Cortona’s 2020 Field Trip Year started on January 20th at Inova Fairfax Hospital where we observed surgery at the LaFraque Observation Deck, “The Dome.” This was the 20th open-heart surgery that Cortona Academy’s Director, Sharon Strauchs, attended with her students. The only one of its kind on the East Coast, the Dome at Fairfax Hospital is where students can actually see heart surgery.

Although the day started early (7 a.m.),we were happily greeted by Darla, a nurse member of the surgery team, who has led us through these surgeries for the past 14 years! To begin, she held a class on the structure of the heart, what bypass surgery is, how it is done, and then explained the causes of plaque in arteries, ensuring that none of us would ever eat a french fry again. Then, we entered the operating arena, at the Dome level, called the “Observation Deck,” where 15 feet below this glass-enclosed structure was the 58 year old patient and his ten-member heart bypass team.During the entire four hour procedure, Darla carefully explained the operation by showing us actual equipment being used and how it works. The grand finale occurred just as the operation was ending. 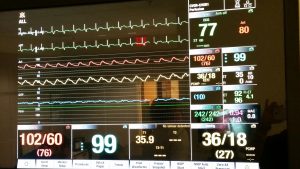 One of the heart surgeons joined us, and had a frank talk with our students about the absolute necessity of being passionate about whatever vocation that they might choose. He relayed to us that even if ten people are on the operating floor with him, he is “all alone.” If there are problems, it is he who must figure them out, and though the team is there, they are following him. Further, he cautioned students to never, ever go into any profession, especially medicine, for the money, or they could end up being a very, unhappy person in life as well as a bad doctor. (Wow!) This young surgeon and Darla impacted lives that day, not just the life of the person on the operating floor, but all of ours.