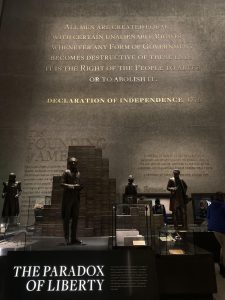 On Friday, November 15th, 2019, Cortona Academy students and parents took their first ever tour to the National Museum of African American History and Culture. This museum is the newest Smithsonian institution on the National Mall having only opened in September 2016. After having not been able to get tickets for the past few years, we were ecstatic when we were able to get in for our first visit! The students were in awe of the thoroughly modern and heartfelt design on the museum, with many expressing that they had never seen anything like it. The museum has about 3,500 items which are on display to the public, but has a collection of over 33,000 objects. Some notable items included : Items owned by Harriet Tubman, including eating utensils, a hymnal, and a linen and silk shawl given to her by Queen Victoria of the United Kingdom. Also, a 1874 wood cabin type home from Poolesville, Maryland. The dwelling was constructed by the Jones family, who were freed slaves. 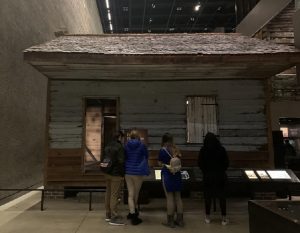 The students were amazed to see a whole home reconstructed inside the museum. There were two very powerful exhibits that the students really connected with. The first was a railroad car from Chattanooga, Tennessee, used by African-American passengers during the Jim Crow era. Everyone was astonished at the differences between the “whites” train car, and the “colored”. The most power exhibit in the museum was undoubtedly the glass-topped casket originally used to display and bury the body of 14-year-old Emmett Till, the victim of racially motivated torture and murder in Mississippi. 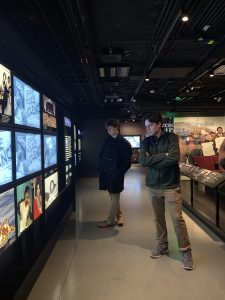 The students somberly took in the gravity and importance of this display, and all later expressed how it really helped them understand the need for racial equality. More than one student said they had felt changed after their visit to this powerful museum, with more understanding of the Civil Rights movement and the need for such an important museum to exist.