Cortona and the Goddard Space Tour

On Friday, April 27th, 2018 a group of Cortona Academy students, staff, and parents made the trek to Maryland’s NASA Goddard Space Flight Center. After a brief look around the Visitor’s Center, the group was lead the ever impressive “Science on a Sphere.” This magnificent piece of technology gives both real-time and pre-recorded views of the earth and space. The students were shown the views from the Hubble Telescope and information on the new James Webb Telescope, how it is constructed and how it will relay information back to earth. The group then took the NASA bus and proceeded to the first stop, at the 85-foot-tall Clean-Room, which is one of the largest in the world. It was in this room where parts of the James Webb telescope were assembled before being recently moved to the West Coast where the telescope is being assembled. The students were very lucky to see people at work, and even managed to get a wave from the NASA scientists and engineers. They learned about the room’s massive filtration system and why a Clean-Room is so important when working with delicate parts, such as the sun shields of telescopes.

The second stop was at some of the NASA workshops where smaller experimentation chambers are located to test equipment and technology before it is launched into space. Cortona students were fascinated by the different test pods and the smaller Clean-Rooms where they were able to see even more NASA people at work, which is rare for any tour group to see. The visit wrapped up with, of course, a stop at the gift shop where astronaut ice cream was a big hit! As always, Cortona’s trips to Goddard are informative and eye opening. We hope we have at least one future NASA employee (or Mars astronaut) from our student body. 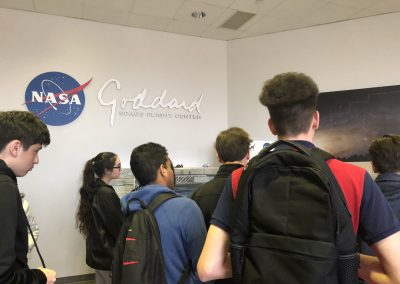 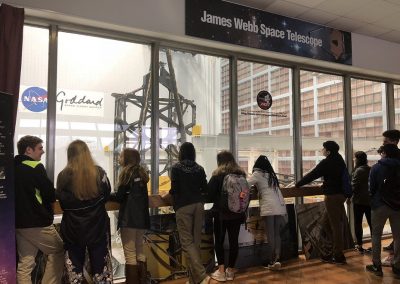